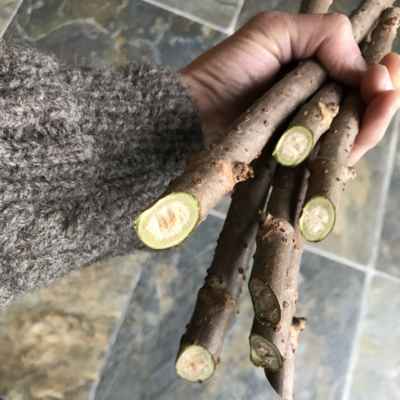 Growing elderberries isn’t hard, but there are a lot of conflicting sources of information. Probably because different growers use different methods.  Some start in pots, some outside.  Some use rooting hormone, some don’t. Etc.

I’ve had the best success starting in the ground (usually planting in March) without rooting hormone. When planting a field for production, I do a soil test and  address glaring deficiencies.  But I’ve also had success by just preparing the hole by spading in some compost.

The bottom set of nodes should be 2-3 inches below the soil surface. Good contact between the cutting and the soil is important, so if it’s muddy and clinging to the cutting that’s fine.

You definitely want to make sure the cuttings don’t dry out. This isn’t much of a concern in our southern Ohio climate, but it we have a dry spell during the summer you might want to put some water on them. 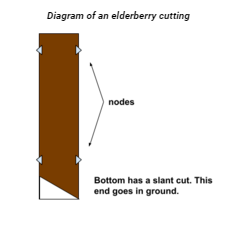 The cuttings can handle freezing temperatures and snow.  They will slowly wake up in spring and summer. Sometimes the cutting may not appear alive, but I would give a cutting until fall before I give up on it.  Sometimes the cutting itself may not develop leaves, but the roots will grow underground and send up a new shoot near the cutting you planted.

The above is based on my experience. My survival rate with growing from cuttings is about 80%, and I’ve heard others claim higher survival rates. So you should also consider what more experienced, growers have to say.

Links to other information about growing elderberries.

From River Hills Harvest is a farm in Missouri that is considered a leader in elderberry farming:  https://docs.google.com/document/d/1hKt69A0B39xSFQEas8azVvTuHsNlLJcW/edit

From University of Vermont -   https://www.uvm.edu/sites/default/files/media/ElderberryGuideComplete.pdf