Do you know how to prune an elderberry bush?  Me neither. Although I've grown elderberries for over a decade, I'm still relatively new at growing them on a large scale and managing them for production.

Despite not being certain as to the right approach,  I started pruning this week on a 50 degree February day, and I hope to finish within the next 10 days or so.

Some of our plantings are now old enough that they need to be pruned, so I’ve been looking at what the literature says and what other growers do.

Turns out that, like a lot of things in agriculture, the guiding wisdom on pruning elderberries is conflicted. There’s a school of thought that says, once the plants are a few years old, you should cut them to the ground every winter. This is believed to reduce pest and disease problems and keep the bushes a manageable size.

Another strategy is selective pruning, removing the largest and oldest canes and cutting back any that have become too tall, or that might contribute to an overcrowded canopy.

One 5 year study determined that selective pruning “was an excellent way to manage elderberries” and, contradictorily, “pruning to the ground also resulted in satisfactory yields”.   It was probably painful to write such an equivocal statement after 5 years of study.  But such is the way of science, I suppose.  The facts, however befuddling, must be respected. 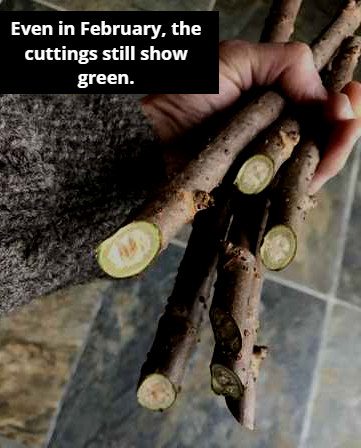 Add this to the mix:  I’ve heard anecdotally that some varieties of elderberries only fruit on second-year canes, but no source ever states which varieties these are (we are presently growing 7 different cultivars).  Then there are statements like this one from The Elderberry Book, “(a) few people have reported that, after ground pruning their patch, it became unproductive the next year.”   That made me drop my shears and step quickly away.

So I’m charting a conservative course: pruning the thickest canes to the ground and reducing the height on the remaining canes.  We’ll see how that turns out next summer.

If you indicated an interest in cuttings, I’ll be in touch soon with a list of available varieties. Click below to add yourself to the interest list.