Just as I was starting to think about preparing the lawn mower for its first run, the yard breaks out in purple.

A thousand wild violets dot the lawn, welcoming the early bees.  I set the mower deck high and shave the grass above their heads.  Mowing so high means I’ll have to cut it again soon, but it’s worth it to let the flowers continue their bloom.

There’s not much else available for those first active insects, apart from a few dandelions and dogwood blossoms and for the caterpillars of fritillary butterflies there is nothing else. They will only eat violets. 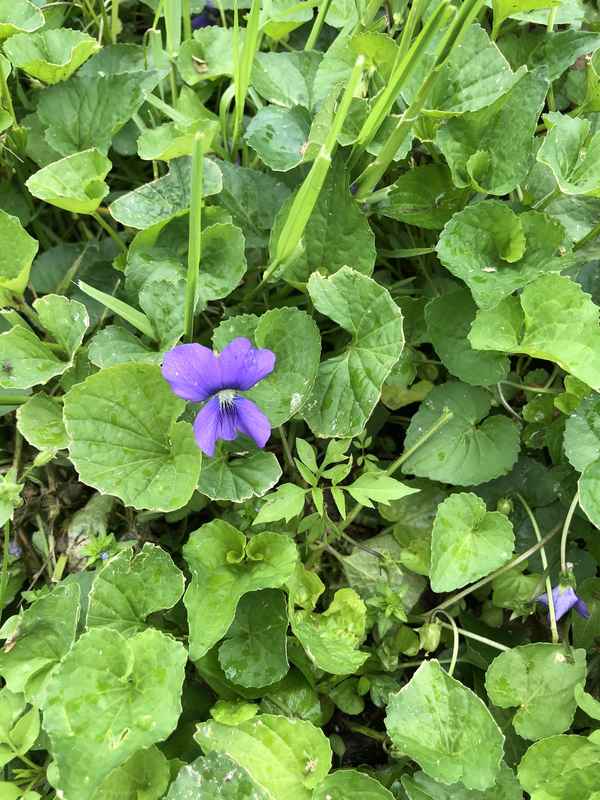 There were several seasons as a young gardener that I considered violets my enemy.  A pernicious weed, I thought. They spread so rapidly.  I pried their rhizomes from the ground to prevent re-sprouting until my fingers were stiff.

But as time went on my attitude shifted.  Violets grow so close to the ground that they don’t throw shade; the dark hearts of their leaves provide a nice backdrop to other plants and, well, their flowers are considered desirable enough to be used by florists. Not so bad for a weed. I decided we could co-exist.

Then several years ago a coworker shared with me a small jar of violet syrup. I had never heard of such a thing.  Her mother-in-law had shown her how to gather spring violets and make the light syrup. It was an activity they performed together each year.  What a beautiful spring ritual, I thought.

Turns out it was a good thing I decided to cut the grass high.

Unbeknownst to me, Beth had seen a recipe for violet jelly on social media and was inspired to spend an hour harvesting the lawn.

She washed the violet blossoms, placed them in a jar with just boiled water and left them overnight to steep. The resulting dark lavender liquid was mixed with sugar and pectin, and the addition of lemon juice performed acidic magic, turning the mixture a bright pink-purple. A bit of spring to accompany our bread and butter.

Violets weren't just feeding the insects this spring. It's amazing the gifts a simple shift in attitude can bring.