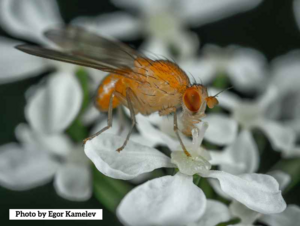 No, it’s not Single, White Divorcee. It’s not a new kind of cryptocurrency or a texting abbreviation.

SWD is a fruit fly from Asia, first detected in California in 2008.  2008 doesn’t seem that long ago to me, but this little fly is no laggard. By 2011 it had reached Ohio, and is now fully established on the continent.

It hardly seems threatening. Like the ephemeral flies that circle your overripe banana, SWD is little more than air.  Unlike most fruit flies, however,  SWD is attracted to unripe fruit, into which the female makes a small slit with her ovipositor and inserts her egg.  Fruit makes a good home for newly hatched larvae, but newly hatched larvae do not make for good fruit.

Have I mentioned that SWD sports large, devilish red eyes?  This is an entirely scientific account, and I wouldn’t dream of allowing my personal feelings to color this report of SWD.

Typical fruit flies can be avoided by removing ripe fruit from the field in a timely manner.  But how do you prevent SWD?  Some fruits can be harvested early, as they continue to ripen after picking, but not elderberries.

SWD can wipe out a harvest, and it’s not just a threat to elderberries.  Cherries, blueberries, strawberries, peaches, and raspberries are among the other soft-bodied fruit that SWD targets.  It is estimated that SWD causes $718 million in damage to US fruit crops yearly.

Growers of these fruits need to have a plan for dealing with SWD.  It starts with weekly monitoring of homemade traps of apple cider vinegar (which the insects love) and soap.

Because the SWD is so small, one needs a magnifying glass, loupe, or microscope to examine insects in the trap to see the red eyes, wing spot (on male), and ovipositor(on female) that are the flies' distinguishing features.  For non-organic growers, there are a number of insecticides.  There are a some organic-approved insecticides also.  Both types of insecticides are often broad-spectrum, and kill beneficial insects as well as pests.  This year we have opted for monitoring, with physical exclusion (aka netting of the berries) if SWD is detected.

Because I’m anxious for a good harvest, I am prepared to do some preventive netting also. When the temperature drops into the 60’s/70’s and humidity is high (conditions the pest favors), we will net cymes (berry bunches) that are starting to ripen.  This is hugely labor intensive, and I’m not sure we will be able to depend on physical exclusion next summer when an additional 350 plants will reach berry-bearing age.

University scientists are hard at work seeking effective responses to SWD.  Along with many others, I’ll be eagerly following their progress.  In the meantime, let’s hope for hot weather and sunny days as the berries continue to ripen.

Sial, A. A. Moving from Crisis Response to Long-Term Integrated Management of SWD a Keystone Pest of Fruit Crops in the United States.